Without a new European patriotism, the decline of the EU is inevitable

On 26 March, an utterly divided EU emerged from the European Council dedicated to European measures aimed at managing the severest crisis since 1929, one far worse  than the 2012-2017 crisis. The coronavirus pandemic and the transpiring economic and social crises present Europe with an extraordinary opportunity: to decide to move towards a deeper unity, or to decline irrevocably. The prevailing road will naturally depend on the decisions of the governments in the European Council and other EU institutions; but also, and above all, on the mobilization of citizens and the public opinion in each of the Member States.   Can we still expect concrete and visible measures managing the ongoing tragic health crisis, as well as the imminent socio-economic crisis? Measures which correspond to the EU’s values, traditions, and increased global responsibilities? The question for Europe is the following:  is the EU a community of destiny, a Schicksalsgemeinschaft, or is it but an instrumental association of national selfishness, where the blind choice of each man for himself clearly prevails over rising up to historical challenges?   Does a common sense of belonging, based on strong common interests but also the commitment to stick together, still exist?

The forces of disintegration from the right and the extreme right,  victorious with Brexit but temporarily defeated in the EP elections of 26 May, are here, ready for a  renewed,  relentless attack on both  the euro and the EU. And this time round, these forces might even prove victorious, cynically taking advantage of the massive popular disconnection from the EU, caused partly by the enormous suffering endured during this health crisis and the social and economic tragedy that awaits us,  but also by the political and moral inaction of the pro-European elites.

The European Parliament has clearly spoken out for a leap forward in European integration. The European Commission however, notwithstanding launching the great, visionary and identity-shaping project of the “Green Deal” in 2019, bears a great responsibility in the current stagnation. This is due to its lack of leadership, both in terms of the multiannual budget, and in proposing measures to manage this health crisis and its economic consequences.

Contrary to the 2012-2017 crisis, this crisis does not amount to an asymmetrical shock: it is symmetrical, affecting all countries, even if it currently strikes especially hard in the countries of the South, which already endured the most during the migratory crisis. A situation of exceptional emergence requires exceptional remedies.

The ECB’s decision to commit 750 billions euros to the bond market is important, but it is not decisive, as, during past crises of lesser gravity, the ECB engaged between 50 and 80 billions per month for several years. (Q.E). Moreover, the ECB cannot be expected to act alone: its measures must be accompanied by national and European policies.  The suspension of the Stability Pact may enable national governments to respond to this emergence as they would “to  a war”,  in the words of  Draghi  (Financial Times): to finance the greatest efforts in saving our industry and our economy, which will then trickle down to the employment level.

But all this is dramatically insufficient in the face of dire needs and public deficits, which, in the context of the expected recession, will only increase with an estimated 2 to 5% of the GDP. It is therefore imperative that the EU combines an outpouring of anti-virus solidarity with concrete financial solidarity.

Why so little initiative and creativity within the EU institutions? Why such bureaucratic inertia?   Political, symbolic and mediatized measures of solidarity would help enormously, particularly in a setting where only aid from China, Russia and Cuba appears to manifest itself!

The situation in the EU has never been more threatening, and political decisions can push millions of citizens towards Euroscepticism and nationalism with unpredictable consequences, as sadly demonstrated by the Hungarian case.

Indeed, reciprocal accusations are harsher than ever. On the one hand, the theme of the Dutch and German right of “moral hazard”: eurobonds, meaning the mutualization of national debts, would encourage immoral practices and budgetary laxity in indebted moral hazard countries.  On the other hand, the Northern countries are accused, not only of lack of solidarity in a situation that sees almost 1000 deaths a day in Italy and Spain, rising social unrest and a significant breakthrough of the pandemic in France and  Belgium, but furthermore, and most weightily, of wanting to take advantage of the looming financial crisis to enrich themselves and to change the balance of power in Europe. Getting rich? Yes, by the desire to attract global savings to national bonds. And by attracting the investments of multinationals, by means of tax dumping obtained by lowering corporate taxes. These reciprocal accusations no longer solely stem from European subcultures which enable the likes of Salvini, Wilder,  Le Pen or AfD, but also  resonate with the decisive central circles, with those who invested in the construction of Europe. These heavily mediatized reciprocal accusations, this collapse of trust, are upsetting even the most convinced Europeans, are bogging down the very core of the European consensus which has been painstakingly built the past 70 years. The damage to our democracies may soon become irreparable.

The European Council of 26 March failed miserably in the search for a compromise. More disastrous in fact, it delegated the search for a solution to the Eurogroup, even though the latter in turn just delegated this very matter to the former. A deadlock, which needs to be solved within the next few decisive days.

We are convinced that, not only within the 8 Member States whose governments have compiled and sent the letter for coronabonds to Charles Michel, but also in the public opinion of Germany, the Netherlands, Austria and Finland, there is a broad consensus for:

1. The first message, one of hope, must truly speak to the ordinary citizen, to the peoples of Europe who are upset by the coronavirus crisis and worried about their future: the EU is here to help.  It is facing this health, social and economic crisis head-on,  with greater unity and a great economic and social recovery project.

The EU bears a global responsibility to the human race. The US has underestimated the current pandemic, and its central administration has proven that it no longer holds the necessary political and moral authority to effectively coordinate the battle against the global coronavirus, nor to issue new economic policies needed during this period of primaries and in this phase of self-isolation. China on the other hand, is yielding its soft power. Its aid is welcome, but, in light of its responsibility for delays in lack of transparency about the disease and its victims, this country’s approach cannot serve as an example for the EU, as it de facto opposes efficiency and respect for the rights of the individual.  India finds itself in a state of total chaos, whereas  Brazil is held back by a strange president who has presented himself as the last in a sadly long line of pandemic deniers. Only the EU, in a context of multilateral cooperation, can successfully step in and pave the road for the management of this unprecedented health crisis and its social and economic consequences.

The time has come for a new European patriotism. New, because it absolutely needs to be rooted both in national communities remobilized on the theme of solidarity, as well as in transnational networks. The millions of committed citizens, volunteers, health workers and civil society voluntary associations, active in the fields of work essential for the survival of our society, come together as one: this is the solid human basis for a new phase of the idea of Europe, this is the way to link Europe’s core values to the technical and political capacity in an innovative way, this is how we offer the world a message of hope and strength against this unprecedented crisis.

Gesine Schwan, former  President  Viadrina University of Frankfurt  a.O. and twice candidate for the Presidency of the German Federal Republic

Biagio De Giovanni, former Rector of the Eastern University of Naples and Chairman of the EP Constitutional Affairs Committee

Lucio Levi, University of Turin, director of The Federalist  debate

Ruth Rubio Marin, Professor at the European University Institute and the University of  Seville and UNIA UNESCO Chair in Human Rights.

Mario Telo’, professor  at LUISS-Rome and IEE-ULB, member of the Royal Academy of sciences

Didier Viviers,  Perpetual Secretary of the Royal Academy of Belgium

Michael Zurn, Professor at Freie University and Founding  Director of the Hertie  School  in Berlin 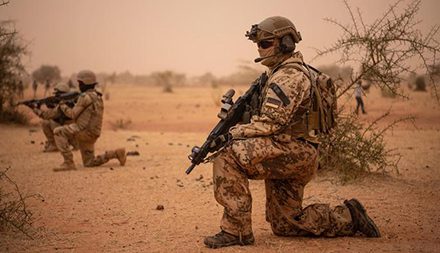 Turkey’s “anti-colonial” pivot to Mali: French-Turkish competition and the role of the European Union in the Sahel